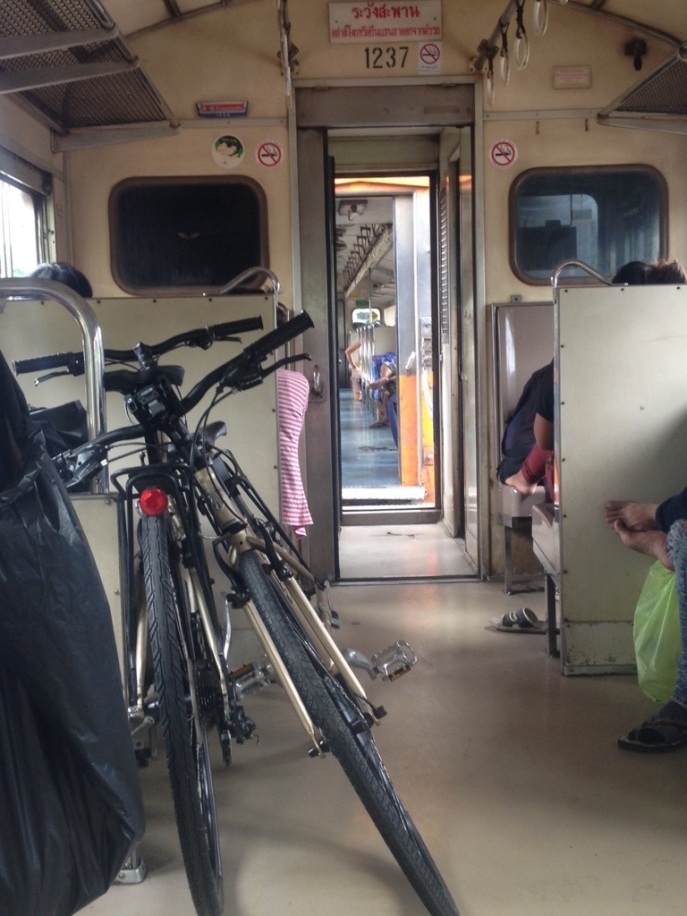 Having done some research and read several blogs (Mike’s Travels in Asia being one of them), I decided it was not safe to cycle out of Bangkok.

Train from Hua Lampong Train Station to Ayutthaya. A bargainous 15THB for people, a not so bargainous 100THB for the steeds. The first puncture and the strangest dining and Karaoke experience, ever.

A day of consolidation in Ayutthaya. Spent taking in the floating market (a heavily tourist-driven attraction where a woman tried to charge 20THB each for parking our bikes – er, no), the wats (complete with special ‘Foreigners’ price – again, er no) and avoiding the roving dogs.

Hot hot hot. Sweating, squinting to read the GPS on my iPhone and more dog avoidance. And another strange dining experience at The Broiler, Lop Buri.

After GPS said ‘no’ we made our own route. This was a better day of cycling, winding through rural villages, stopping occasionally to snap a wat and buy 10THB orange drinks at the side of the road. Beautiful greens, soggy paddy fields and big smiles.

Despite the plan for the longest ride so far, woke up, took in the grey sheets of rain against the silt brown of the Chao Phraya outside the window and booked into the hotel for another night. Once again nearly attacked by dogs.

Getting into it now. Arrival at the most striking town so far. It still retains its strong connection to the Sake Krang River, Delightfully exudes an Old West feel with its wooden shutters and wide dusty streets and has a huge amount of bike shops. Most of all, it is a friendly place.