Mountains are big, to many they are insurmountable, to others they are a problem to be solved and a chance to learn.

The Thai hills between Phrae and Lamphang, best seen from a train

Thailand is behind us and we have moved on to Malaysia; first stop Georgetown. Georgetown has a lot going for it – culture, food, architecture, museums, Queen’s Bay sunrises – but we decided we needed to do something more physical. So, we headed to the edge of town, to the Botanical Gardens to begin the walk to the top of Penang Hill.

The road heads up the hill just left of the entrance to the gardens and is clearly marked for walkers. But there is also a route from inside the garden, a series of steps cut into the humming jungle.

The jungle stairway, from above

Over the last two months I’ve realised that I need to DO something when I am travelling. Doing, rather than observing, allows me to feel more a part of the landscape or environment I’m in. Of course I am still a stranger but I am interacting (even if this means sweating all over and gasping for air). For this reason I would rather walk somewhere, hire a bike, get a public bus (although on this day I was eating my words; we got the wrong bus, which meant a further two bus journeys, not much less than an hour each) or train. That is over an organised tour, where sights are flourished before me, along with the food, drink and t-shirts, before I am gathered up for the next experience; this should appeal to my lazy nature, but it only leaves me feeling empty and frustrated. So, the walk to the top of Penang Hill seemed like a good idea.

Mostly, these steps just go straight up and will not spare you. The path hits the road eventually, passing a rest area where macaques hang out, scrounging food from the locals and nursing their young. At this point, I believed the hard work was done. Sure, we had more hill to go, I estimated 3km of it, but the climb was on concrete and I’d read somewhere that it was only the first kilometre that was really steep.

On the road, glad to be free from the suffocating jungle, we came across the first way marker. A small blue sign, printed with 1.6. I assumed this indicated 1.6km covered from the bottom of the road, and this conviction was strengthened when approximately 100m later we passed 1.7.

The markers climbed with us. The climb became a real climb, signposts indicating that the gradient was 30%, tendons in my legs stretched to their maximum, bent double, breathing hard, willing myself around the next switch-back; I realised I was relying on these markers. They told me I was making progress to the 5km summit. As I passed one marker, I could think about the next. Each time I saw a marker, my waining will was recharged a little and in spite of the sometimes laughable gradient, I was reassured. 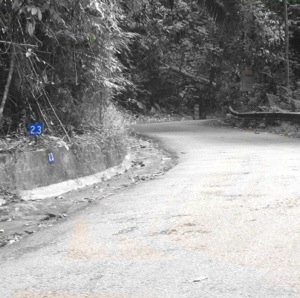 As I climbed, I thought more about these little markers. And found I was remembering one of the most awful and the most exhilarating days of the trip. It was the most challenging day of bike riding (although we could not comprehend quite how challenging at the outset), a distance of 110km from Phrae to Lamphang, crossing hunched, indifferent mountains to get there. I had done my research, several cycling bloggers who had beaten the path before us had commented on there being a number of hills, a couple recounting that there was one particularly long climb that took over one hour. With each hill we climbed, I was not sure if that was the big one, but hoped each time that it was. I became increasingly tired. But when the big one came I knew it. It was just after lunch, I was stood less than 1km up a climb on Highway 11 and I couldn’t go on. The gradient was steep and unrelenting, carrying all my luggage, the bike moved no faster than walking pace as I ground the pedals round, wobbling with my weight. My whole body pulsated in the 40 degree heat and where fabric did not cover me, the sun stole what energy I had. My head pounded, telling me I needed more water but our supply was limited and I had no idea how long the climb would last.

A milestone (or kilometre stone, as it really was) had told me we had 45km left to cycle. The number boggled my mind. ‘But the climb,’ something inside me demanded, ‘how long is the climb?’ I could not think of anything beyond the next 5km but I had 45km to worry about. What I really wanted someone or something to tell me, just a little further, only 2km left to go…

There was nobody to rescue me, I knew that. Nobody could make it all go away. But something inside me still demanded to know how far, it raged, it would not, could not go on if it did not know how far. It was not enough for that each 100m I travelled, whether I pushed the bike or rode it was 100m behind me, I would not have to travel that distance again. But I could not believe that I would see the top of that mountain. I did not have the faith that each step or revolution took me closer to what I had set out to do.

When I finally got there, cycling the last 100m in a blind panic, fleeing from the huge (in my mind) red and black bug that continued to harass me, I felt two things; relief and trepidation, because I did not think I could do it again. But heaving my way up Penang Hill in the company of those handy blue and white signs, I realised I relied on way markers way too much.

I believe I need them in other parts of my life; my job, my relationships, the sports I enjoy and that thing I think of most of all, writing. I look for little signs everyday, especially when I am back home, things that will tell me I am doing ok, heading in the right direction. If I cannot find them and don’t tell me what I want to know, I feel despondent. Take my job; wage rises, reviews, promotions, the attitude of my boss and other colleagues, the responses and reactions of customers I meet. One problem with this mindset, I realise, is that you come to rely on them. A second problem is that they might not really be giving you accurate information, there are so many variables out there. The third problem is that the mindset is like that of a child who looks for praise to affirm that the things they do are good. The fourth problem is that it is a poor and misleading substitute for faith.

There is a fifth problem. Its a habit. I have this bad dependent habit that is hard to break. And worse still, what I want to do most in life is to write; never was there an area of life so dry and barren of encouragement and so dependent on faith. Rejection and despondency spring up like brush in the desert and if they can they will snag all your inspiration and ideas and hesitant starts; if you let them. All there is the desire to do it and the faith to keep going. 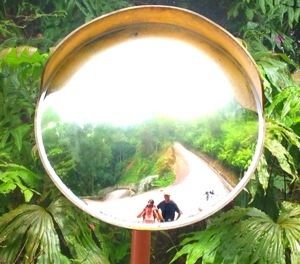 My trip and this blog have been part of that. I have found that the blog stats can suck me in, encage my habit. I can look at those statistics and be energised by a new follower (yes, just one will make me happy) and floored by a post that nobody read. But doesn’t everybody feel that way? What is important is that you (I) don’t give in. There are no signs, no measurements, no-one to tell me yes or no, just a hill waiting to be climbed and a blank screen waiting to be styled in black.

This is a good time to say a big ‘thank you,’ to everybody who does read my posts…