First it was the stage to Khampaeng Phet, then the one to Sukhothai, now it was the one to Uttaradit. Each stage in sequence was the worst we had done, only to be replaced by the next (little did we know that in a few days time we would wish to be back on those flat, endless roads).

It didn’t begin badly. We wended our way through Sukhothai, the early morning shadows still long, smiling with fond recognition at row after row of bicycles, passing wat after wat, stopping to take photographs of lakes and lily pads spread like a rich carpet before a regal wat. We could have stayed longer in Sukhothai if the kilometres we had to crunch hadn’t been so insistent. 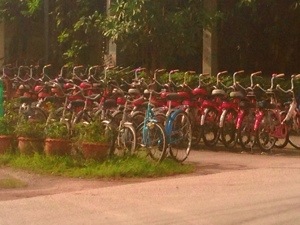 Something to identify with…

So, what’s the problem!?

1.We were tired from the run the day before, having spent approximately 8 hours in (and out of) the saddle.
2. We had slept poorly, having been woken up by ceremonial drums or someone with a sick sense of humour at about 4:00 in the morning.
3. Our hands were more painful than ever, becoming as much of a hindrance as the baking heat.
But the baking heat was still a big problem. With a love of good hotel breakfasts and a belief that they were essential for the cycling day ahead, we stayed too long at the hotel, heading out as the day was starting to warm up to the blistering lunch time incineration level.
4. The first (small) signs of gradient. Nick pedalled at these, spoiling at the mild challenge, where as even the sight of them made me more lethargic and I began to worry about things to come.
5. Food again – the huge (and very delicious) chocolate milkshakes we enjoyed at lunchtime in Si Satchinalai increased the burn. There is a good reason why competitors in the Tour De France do not stop off for milkshake; if I could have got more sluggish, then I did after that shake. That said, I’d take the shake every time, it was amazing!
6. Finally, as sure as night follows day, negativity breeds negativity. Instead of the hoots and the waves, all around us was noisy, fast, unforgiving traffic.

I tried and failed to stir some positive feelings with 80s soft-rock (this usually never fails), then turned on ‘The Woman in White’ audiobook, hoping to distract myself with a story much darker than my own (there’s a logic to it somewhere).

One blessing was that that the hotel was sign-posted from well out of town. With aching hands and hearts we followed these on auto-pilot for kilometre after kilometre before the mecca of the Seeharaj Hotel (home of mid-week karaoke), came into sight.

Stayed at Seeharaj Hotel, Uttaradit, where they kindly allowed us to keep the bikes in a cranny, just off the main reception.
Cycled 103km, check out the link on Strava.
No punctures, no rain but my bad attitude made up for that.