These are Dave’s legs. As you can see, I followed him. We met on an organised tour to see the Rafflesia flower in the Cameron Highlands. The Rafflesia is one of the largest flowering plants in the world. Dave is ‘farang’ (a Thai word for people of apparent European descent), so am I, and, likely, so are you. 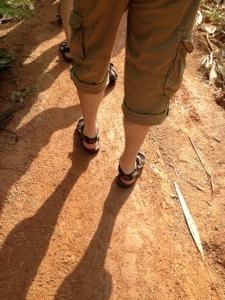 This is the Rafflesia…

I’m not sure what I expected when I flicked through my Lonely Planet books last autumn, imagining my journey through South East Asia from the comfort of my Yorkshire sofa. There were so many amazing things between the pages, Thailand and Malaysia had so much to offer; rock climbing, snorkelling, scuba diving, walking through caves, cycling through ancient cities, kayaking through mangroves (whatever they were), riding on elephants, trekking to remote hill tribes, culture, history, food. On one hand I had no idea which of these things I really wanted to experience. And not once did I think of HOW I would experience them.

In the beginning it did not matter. When I reached Thailand I could do little more than limp around Kata Beach, Phuket, before spreading out on the sand for the day. My left ankle was painful and swollen and on top of that, I managed to fall down a huge hole part way through my stay. Still, on the beach road I got my first experience of Thailand’s tourist industry; shop front after shop front touting taxis and tours, an assault of leaflets and ‘A’ frame signs. Each ‘Travel Agency’ hawked the same tours – Five Island Tour, James Bond Island Tour, Ko Phi Phi Island Tour (they filmed ‘The Beach’ there), Elephant Safari, or all of these squashed into a one-day bonanza. It had a ‘roll up, roll up,’ feel and it was all about the commission..

The Thai people working the shops looked bored. If you looked long enough (three seconds might be enough), then they would call out to you, barely hiding their cynicism. They would smile, because you are business. The smile would not touch their eyes. No thank you, I stubbornly said to myself, I did not want to see James Bond Island that badly, or at all. Somehow, those far off adventures I had read about were tainted.

One day, I walked from Kata Beach to the Southern view point, passing the elephant safari centre on the way. I walked slower, peered towards the canopy without trying to be obvious, saw the huge beasts chained, moving a step backward, one forward on a dirt floor, again and again. From my distance, for that snatch of time, the conditions looked poor. I always thought I would see – not only see, but touch – elephants in Thailand. People told me I would but I did not want to give money to a place like this.

At Karon Beach, Phuket I was hijacked by Joy and on Koh Lanta I satisfied myself with the moped, the rubber plantations and the local animal rescue centre.

Things changed in Ao Nang; unapologetically touristy as it is. I watched the Muay Thai, snorkelled as part of an island tour, cycled the island of Koh Klang, kayaked through mangroves and was shunted between hot springs and emerald pools in a steamed-up minivan.

Snorkelling (800 Baht, say £17-18). I shivered (I was not particularly well) on a long boat for eight hours. I caught Thai fishermen and slices sunlight on my iPhone, took walks on remote islands and watched a beautiful sunset. All this under the care of three ragged Thai men – in charge of the long-tail and catching squid for our dinner – and a Spanish man who excelled at draping himself across the bow of the boat and diving into the navy and turquoise depths at unexpected moments. I believe he might have offered some information about the snorkelling or the fish, but this was only to the privileged few at the front of the boat and was quickly lost on the wind.

When my brother arrived we took more tours.

Krabi Ecocycle took us to the Muslim island of Koh Klang (1000 Baht, £20+), where Wut, the enthusiastic proprietor showed us around the island, demonstrating the craft and history of its people. ‘Eco’ is the buzz word in tourism now. Really, whatever ‘eco’ prefixes, may have no less impact on the environment than the next non-eco tour, but on this occasion – cycling equals human power – the title is justified. 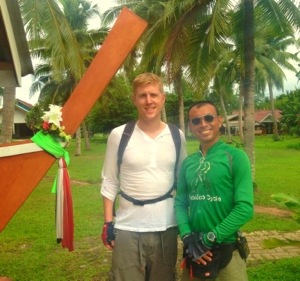 My brother, Robert, and Wut

And the kayaking (600 Baht, £13)? Well we got to the water’s edge in a gas-guzzling pick-up, piled into two-man kayaks, and with little instruction we crossed the sea and into the mangroves.

The emerald pool and the hot springs were wet; not just in the pools but out. It was truly miserable (I grant you I went in rainy season so should expect rain). We were sealed in a steamed mini-van with an extended family of Japanese holiday makers and carried from one site to the next. The overweight driver pulled back the door to release us, and I felt like we were dogs let out for a run. The purpose-built (for tourists) sites were deserted, low season and the rain driving the remaining few for cover. We made the walk to each attraction, dipped our bodies with all the other humans, then made the return journey to await rescue from the rain. 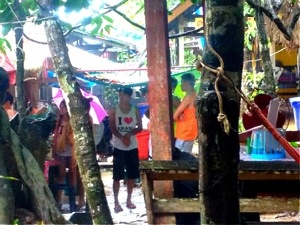 I felt like a caged animal, forced to endure an indignity to which I would not willingly subject myself. But the fact was, I had.

Our group numbered no less than 20. This is where we met Laura and Dave (who were on part of a 16-day tour of Malaysia), some vocal Americans (with a strange penchant for ‘Are You Being Served?’) and Pok, their professional guide (originally from Thailand).

We followed yet another guide to find the flower, accompanied by some local men. All had fearsome knives; for what, I am not sure, because the path through the jungle was a thoroughfare, populated by several other large groups, leap frogging each other and crowding to be first to get to the flower.

The flower in its rotten form…

What they did not tell us (or else they did it so quickly that I failed to hear) is that the flower, far from being an out-sized epitome of beauty, is known locally as the ‘corpse flower.’ Not only do its petals resemble traumatised flesh but they smell like it too. The flower is part of a parasitic vine and attracts flies by the dozen.

I’m not sure Dave and Laura enjoyed it; they were looking forward to the tea plantation scheduled for the afternoon. Pok wanted to leave. He skipped through the undergrowth on the trodden down backs of shoes (a Kao San Road buy), cynical about Malaysian time keeping and organisation, anxious to make sure the transition to the plantation went off.

For me, the tour was everything I feared when I walked by those shops at Kata Beach. I was repulsed, by the experience, as much as by the flower.

But we saw what we wanted, right? So, I have asked myself, why I am so against organised tours? Am I the worst of all tourists; the hardest to please? It came to me, as I was cycling through Sydney Olympic Park along the cobbled Olympic Boulevard, pristine after 13 years. Bright green flags flapped, still celebrating what was past, great curving buildings stood as proud as ever. Pride; that was it. Most of the tour companies in S E Asia seemed to have no pride in what they were selling. The pools, the mangroves, the flowers were places used to entertain farang. It seemed the tour companies cared little about preserving these sites and farang only trampled and left.

In an effort to balance my cynicism, I would say Wut (Krabi Ecocycle) was different. He clearly took pride in his business; the tone of his body, the condition of his pick-up and his mountain bikes, the diversity of his tours, the explanations that he gave of the surroundings, all said so. So, his are the type of footsteps I would follow, away from trampled nature and cardboard culture.

And perhaps that it why I ended up with a bike between my legs and half of Thailand waiting before me, making my own footsteps; no elephants, no islands, no huge flowers…