After 24 hours in Malaysia my brain was struggling (with the noise, sticky heat, roads – their treachery and lack of pavements – stares, dilemmas, the great bulk of my backpack) and searched constantly for patterns, something it could identify with.

My first fear, if it is that easy to separate those slippery, weaving eels, was that once in the guesthouse, my bedroom door shut, in a sanctuary where there were no eyes or voices, it would become my cage. I would not dare to leave, like an animal that desperately seeks safety. Like my cat, in fact, who disappeared behind the washing machine for two weeks when she first became ‘my cat’.

And strangely, it happened just that way – funny, huh? I had more in common with my cat than I thought. But for me it took only 13 hours to emerge and like ‘Little Miss Tib Tabs’, it was food that drew me.

However, I think our similarities end there. Before I could face breakfast (a good job it ran from 07:30-11:30) I had to revise Malaysian culture and food etiquette – always use the right hand (never the left, the poo hand), don’t put the fork in your mouth, use it to push food onto the spoon, wash your hands, before and after…I had images of horrified gasps, the Malay equivalent of crossing themselves (whatever that is) as I unwittingly did all of these things.

But, eventually I clunked my way to the ground floor and within minutes was sat on the covered porch, in a chair the shape of a huge hand, a steaming mug of coffee in front of me. Ahhhhh – I had not been cast out as a heathen.

Shortly after I sat down a grey cat streaked in, only half a tail and little spare flesh. Trotting low it came to rest under a large bench. It was something in its urgency that caused me to look outside, beyond the canopy; it was a dense mucousy grey. Rain, lots of rain.

The cat comforted me. I watched it beneath the bench, tearing at its clumped coat with its tongue, intermittently staring at the monsoon. Like the cat I looked with baleful saucer eyes, but set out later anyway, turning towards the monorail station, umbrella aloft. I fixed on the entrance as I passed the first of many malls. ‘You want taxi?’ An old man looked at me. I shook my head. He would be the first of many. ‘What wrong with your foot?’ Again, the first of many, always men.

Kuala Lumpur is not like the cities I know; European cities. Much of the centre, although close together, is huge dual carriageway. Like any city it is thronged with vehicles, one after another, after another. But there so many motorbikes, armies of (mainly men) on board old puttering machines, their jackets worn back to front across their bodies –

– and then the more I think, perhaps it’s not the construction. It maybe no different from many European cities in build. It was the customs; the noise and the customs. Many of the crossings do not work, so to cross four lanes of traffic people learn split second timing. I found myself walking long pavements, beside these beasts and when I needed to cross, honed the hobble-run. Nowhere else have I walked a dual carriageway into the path of the oncoming traffic. In China Town the roads became narrower, wedged with every kind of vehicle, pipping and chuntering, straddling junctions and, in the case of the mopeds, simply mounting the pavements and using them as a short cut.

Tides of men passed me in varieties of costume while I limped my way up that dual carriageway and I began to think of lame pigeons. Those you see on the street, close to the walls or edges of side walks, a little broken and lost; a sight that evokes pity and revulsion in equal measure. I wondered then about the eyes that ran over me; always male.

Through China Town, then beyond the market dragons and into the city to the magnificent Petronas Towers; one huge monument to capitalism built on foundations of Chanel and Bvlgari. KLCC, the business district; where the corporate animals live. 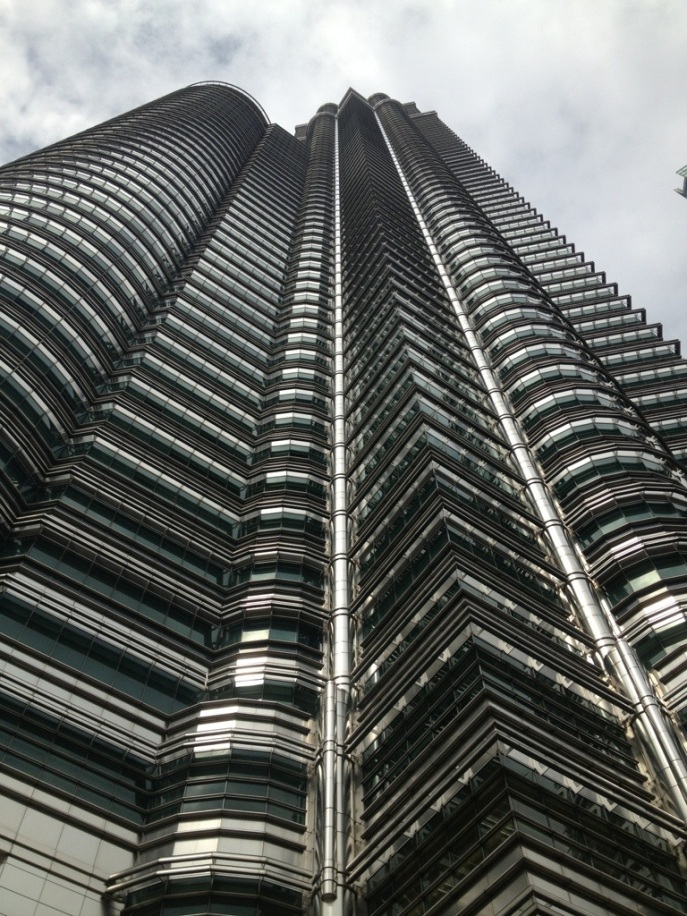 At the guesthouse, safe, I congratulated myself; able to smile, rather than scream, at the lizard scuttling about the light fitting. Aware that I had not eaten, I dared myself to head out again to the street vendors.

Only I didn’t go. Disturbed on the porch by a man who claimed to be in Real Estate, to do ‘oh, maybe one or two deal a year; that’s all I need.’ He had a BMW, he said. He was a good friend of the guesthouse owner, he said. He had time to kill he said, before going clubbing. The club – The Butter Factory – opened late, he was meeting a lady there, an architect. I didn’t tell him he was killing my time, I only wondered that there was this type of man all over the world. Making my excuses, ducking the inevitable invite by pointing at my bandaged foot, I limped to my room. After that, I stayed there, hiding; always the animal. 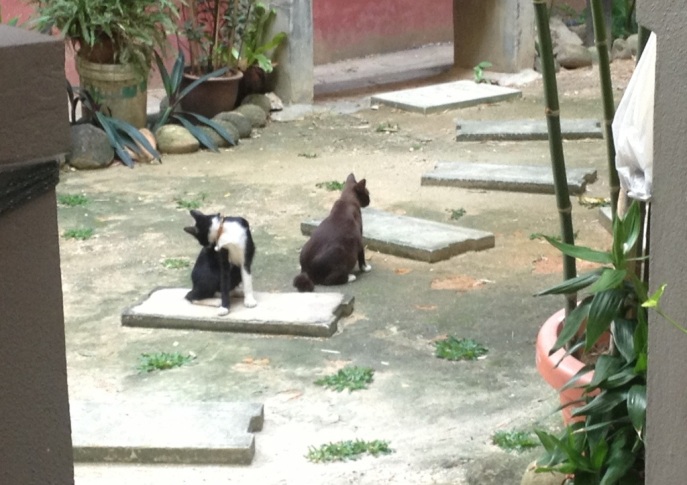